The Desert Fathers: Monks and Monasteries of the Egyptian Desert

Click the book and we'll take you to the Kindle edition.

Click the book and we'll take you to the Nook edition.

Visit our bookstore where you will find most of the books quoted in our blog, as well as many others we believe you will find of great interest on monasticism, Orthodox spirituality, and the Desert Fathers and Mothers. Most of these are in my own library, so I can personally recommend each one. Enjoy!


At the southeastern tip of Inis Mor, the largest of the three Aran Islands, stands the tiny Church of St. Benignus, or "Teampall Bhenain," as it is known in Irish, the everyday language to this day of this westernmost outpost of the Republic of Ireland.  St. Benignus was a disciple of St. Patrick and his successor as the Bishop of Armagh.  Unlike virtually every other church of the early Celtic period, this church is oriented in a north-south direction, but its sole window does look east.  The church is tiny, intimate even, with a floor space of roughly seven by ten feet.  Extremely solid in its construction, the walls are easily 18 to 24 inches thick with many of the stones weighing hundreds of pounds. The only door is barely shoulder wide and most people have to duck when entering. It is not known if St. Benignus himself founded this monastery, but it was clearly built during the early years of the Celtic Church and is one of the oldest in the Aran Islands.

As the probable church of a hermit and perhaps a few disciples, it is unmatched in its beauty and austerity. 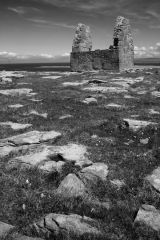 Situated on a high, rocky plateau near the end of the island, the temple offers commanding views of the bay in front, the distant shores of Connemara, and the Atlantic expanse behind.  As the highest point on this part of the island, the winds are merciless and the storms that frequent this area throughout the year can be terrifying.  The surface of the plateau is striated rock, typical of the Aran islands and The Burren on Ireland's west coast.  Deep fissures rend the limestone, making walking difficult as there are deep trenches between the rocks, loose rocks that can shift underfoot, and sharp points that can easily cut the feet and hands.  Soil up here is rare as the wind is constantly tearing any loose soil out and tossing it downwind.  No water is to be found here, either, other than small pools that may catch the frequent rains.  In short, this area is desert, almost devoid of life, unable to sustain crops or animals, with no water close by.

Just steps away from the church's door are the remains of a clochan, the small "beehive" cell that is typical of the monastic abodes in this part of Ireland. Even smaller than the church, it could house only one hermit.  Nearby are the ruins of other structures, perhaps indicating this may have been a small "skete" in which a few hermits may have lived in proximity to one another.  The church's interior, however, could scarcely have accommodated more than five or six men at once.

In a straight line from the church, going down the hillside, are two other ruins. The base of a round tower can still be seen, indicated that a full tower once stood watch over this holy place.  A little past it, is the lower part, perhaps a couple of meters tall, of a well-carved high cross that probably marked the easternmost edge of the monastery's grounds.  Further down, at the base of the hill, is an old well that may have served as the monastery's water supply.  In the tradition of the Desert Fathers of Egypt, it would have been quite "normal" for the monks to choose a water supply some distance away so that they would have to labor to get their water and would thus not waste it by over-indulging themselves with baths, excessive cleanliness, or drinking too much.

Sitting on one of the countless rocks near the church, I reflected on the life these early hermits must have led in this desolate outpost.  There are many other areas on Inishmor where the monks could have settled that would have enabled a much gentler life with good soil and abundant water, as well as greater protection from the elements. Yet, the founder-hermit chose a place that forced hardship on them.  Inishmore now -and then - is devoid of trees and turf.  Fuel for fires has to be brought from the mainland so the nights were very cold in the little stone huts where the monks sheltered.  During the days, the sun shines relentlessly with no trees in sight to offer shade.  From the temple mount, though, the monk would certainly feel close to God. The sky seems close, the only sounds to be heard even today are the sounds of nature - birds, perhaps a few cattle or other livestock in the vicinity, the sound of the waves below, and the wind - an endless wind that blows night and day, without ceasing.

Walking south away from the church, perhaps a half mile distant over sharp rocks that require very carefully stepping, is the other side of the island.  From the edge, the cliff drops at a 90 degree angle, perhaps a hundred feet or more.  There is a small cove, an especially beautiful cove, with crystal-clear waters and waves that pound the circular cove's cliff faces leaving behind a glowing mass of white and green mosses and other plant matter that make the dark limestone cliffs come alive in a symphony of light and color as the sun's rays play with the ocean spray and the vegetation.  Beyond the cove, the Atlantic Ocean reaches out to infinity where, as the islanders used to say, "the next parish is Boston."

As a place of contemplation, it is spectacular; one can easily imagine the monk who would pass some of his time here regularly in silent contemplation of the Creator, his thoughts lost in the wonder of Creation, his heart and soul aching for oneness with the God he chose to follow and worship in this splendid isolation.

There is no other place on earth quite like Teampall Bheanain.  While Ireland's coastal islands are dotted with the holy remnants of Celtic monasticism, the Aran Islands with their monastic riches are especially unique in the history of Christian monasticism.  Standing here, one can feel the spirituality of the Egyptian Desert as it continues to course through this spiritual vein.  Teampall Bheanain is just one of the many holy places still found today in the three islands that make up the Aran chain, but it is surely the most special and most redolent of the ancient monasticism of the Desert Fathers that inspired generations of Irish hermits and holy men and women to find their spiritual deserts on the edge of the world as they knew it at that time.  To visit it today is not just to visit a place of archaeological or historical interest, but to reach back in time and feel in some small way that rich Celtic spirituality that was transplanted here from the dry sands of Egypt.

To see a larger version of this photo of Teampall Bheanain, go to our website at: http://www.michaelmcclellan.com/photo_9533778.html and while you're there, be sure to look at the other photos of Celtic monastic sites!
at 4:20 AM